Silver Nanoparticles Help Heal Wounds. How Do They work? 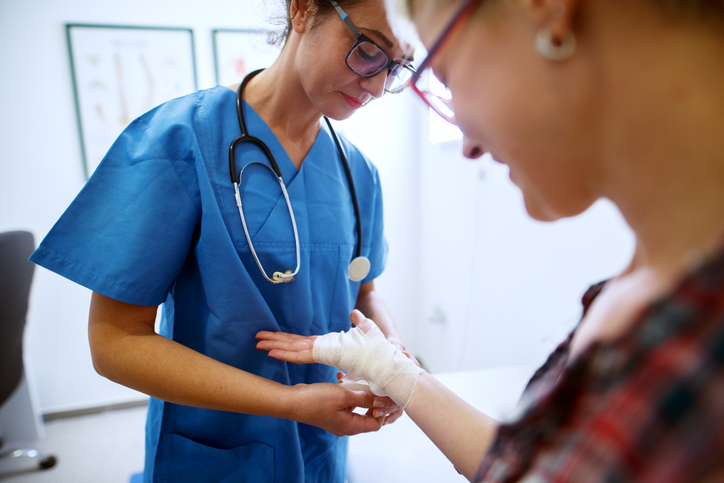 Silver has been used since antiquity to treat burns and chronic wounds by promoting tissue repair, however, it is only over the past century that its roles in protecting wounds against infection have been better understood.

It is now known as an effective multispectral antibacterial antiseptic and anti-inflammatory agent. The bioactive species is the Ag+ ion which binds to the cell walls of bacteria and deactivates many enzymes vital for their metabolism. However, Ag+ is prone to rapid deactivation by binding to chloride or bio-molecules in the wound microenvironment.  It is, therefore, necessary to find a means of maintaining an on-going local Ag+ concentration over the area to be treated.

A new generation of silver-based dressings have been designed with the silver in various forms. One of the most promising is with silver in the form of nanoparticles. Silver Nanoparticles (AgNPs) are particles of silver between 1 nm and 100 nm in diameter. Due to the large ratio of surface-to-bulk silver atoms, they may also contain a large percentage of silver oxide. These particles can be designed with desired properties such as improved stability and enhanced affinity to favour uptake into cells. An extensive review of these materials has been published recently1.

The main concern is with the potential toxicity of these silver-containing materials and it remains unclear whether silver is mobilized as active nanoparticles or as deactivated biocomplexes. This issue is the key for predicting local and systemic activity of the absorbed metal.

Roman and colleagues2 have measured the spatio-temporal distribution and the chemical transformations of silver in the wounds of four real patients who received treatment with dressings containing silver nanoparticles.

Full-profile biopsy samples were collected from the wound beds at different times between admission and complete healing. They were analysed by the high resolution elemental imaging methods of synchrotron radiation micro X-ray fluorescence (SR-μXRF) and laser ablation-inductively coupled plasma-mass spectrometry (LA-ICP-MS), and the chemical speciation of Ag was determined by synchrotron radiation X-ray absorption near edge structure (SR-μXANES) analysis. The results show how Ag nanoparticles and ions interact with bioligands while migrating within the skin wound, as a function of its structural damage and healing progression.

This image shows typical data obtained. One of the samples is shown on the left with the distributional component maps for the area marked.

The metal was found to rapidly release onto the wound surface, followed by a significant structure-dependent millimetre-scale penetration into the damaged tissues. This was accompanied by sequential processes of metallic silver dissolution, chloride complexation, change to metal–thiol protein complexes, and final mobilization into deeper skin layers towards the vascular networks. Complete local clearance of silver was observed after 12 days of treatment in the case of full healing. These data support the capability of the dressing to exert an intense bioactive action focused onto the surface layer of the wound. The results provide an insight into the dynamics of silver in real human wounds, and a new basis for the design of innovative silver nanomaterials with optimal antibacterial efficacy and minimized risk for the patient.

Even in research described in this article, where samples are analysed directly, ultrapure water from an ELGA LabWater purification system was needed to prepare standards and blanks and to ensure that equipment is scrupulously clean and free from contamination. For spatial analyses the absolute amounts of material being detected are even smaller than in trace bulk analysis. Only a system producing the cleanest and most reliable purity water is suitable. Over many years the University of Venice have relied on ELGA LabWater to provide them water quality and consistency.

When lives are at stake, there is no margin for error. Your clinical analyser must receive a constant and reliable supply of CLRW.

Find out how to protect your test results